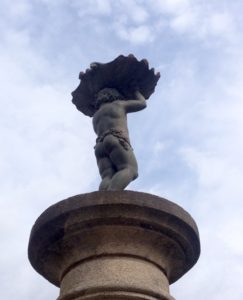 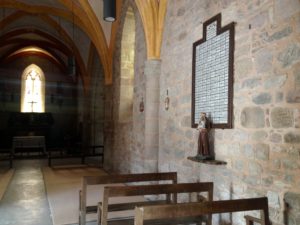 Church Saint-Etienne is in-between the “place de la Fontaine” and the war memorial. Since its restoration in 2010, we can admire its stonework of pink granite as could the parishioner of the XII century: this was a real revival eight centuries after its creation!
More recently, in 2017, new works on the church
revealed decorative lattices on the vaults of red
and yellow ochre color.

This stele has been erected along the “Chemin de la Tombe des Of ciers”, a few hundred meters from the ruins of former castle “de la Feuillade”, midst in the forest on hiking track GR 46. It commemorates the tragic and unlucky death of two of cers struck by lightning in 1884.

There are two wash houses in our village. The most beautiful and the biggest one faces the church whereas the other one is close to our school. The latter now fulfills a new function since it is used as a bike shelter. There are other wash houses to see in villages in the surrounding area such as in Jalagnat, Loudoueineix, Bon Martin
or Arzaillers. 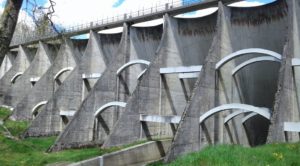 Built between 1947 and 1951, the artistic construction of the Dorat dam with its multi-arches is really original: there are only two dams of this kind in Europe. Alexandre Sarrasin, the engineer who designed it, is one of those who saw the new potential of reinforced concrete. Having made this discovery, he develops the construction of a new type of dam that does not require much volume and mass to resist water pressure. 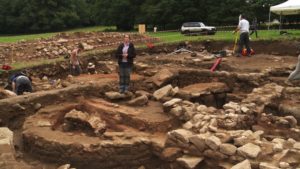 The archeological site in Chatain refers to an antique rural habitat that has been discovered by chance in 1994 by the owner of the plot of land. It is only years later, during summer 2016, that some archeologists came to explore the site. In 2017 and 2018, Archeotek, an association of archeologists led by Gentiane Davigo, started excavations. The point is to understand the layout of the habitat and know whether there was, or not, a dedicated space for bathing.