In the heart of rural France, we live surrounded by lakes and forests, in the midst of a mountainous landscape. The Plateau de Millevaches, also called the “mountain of Limousin” is a rural area located on middle mountain landscape spread on three departments: the Corrèze, the Creuse and the Haute-Vienne. Some people use to call the plateau the “French water castle” because of its numerous lakes, bogs and watercourses that begin there, like the Vézère, the Vienne, the Corrèze and the Creuse. Many of the rivers have been dammed to create large lakes. The largest of all is the “Lac de Vassivière”, the result of damming the Maulde river. Our lake (“lac de Faux”) is fed by the Dorat river, and “Lac de Lavaud-Gelade” by the Thaurion river. All of these provide both drinking water and hydroelectricity. They are also home to major leisure attractions, being lined with beaches, sailing schools, marinas, camp sites and picnic areas.

The “Plateau” gathers around 120 municipalities that are mostly very small of size (half of them have less than 200 inhabitants). There are very few towns or villages of any size on the Plateau de Millevaches, but the towns of Meymac, Felletin, Ussel and Eymoutiers are situated at the edges of the Plateau.

Finally, the Regional Nature Park of Millevaches has been created in 2004 and expands on the entire plateau and some bordering territory.

In the heart of the Plateau de Millevaches, the stones have been ranked among the most beautiful sites by ministerial decree in 2008. The 116 hectares protected site is not only a beautiful place to walk around, but it also bids great botanical and geological interests making it a remarkable place to go to.
Be ready to walk a little, you will have to climb up for some ten minutes before reaching the stones!

The forest of the Feuillade is a private forest of 800 hectares that already existed since the middle ages. Some old writings mention this forest where one could find impressive beech trees. As of today, the forest is mainly composed of softwoods and exotic trees such as sequoias and American oak trees. It is one of the oldest and largest softwood expanse of the Limousin.

The 45 hectares lake of Faux-la-Montagne is the continuation of the Dorat river. Fishers and wild nature fans really love the lake for its diverse terrain and steep slopes. There are several spots for carp shing. Next carp fishing enduro will take place from August 30th until September 2nd. Swimming is strictly forbidden. 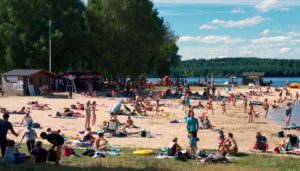 There are several beaches at the “Lac de Vassivière” but you will definitely enjoy your time at the beach of Broussas, whether on your own, with your lover and / or your kids. On the spot, the “Cabane de la plage” offers all kinds of drinks, snacks and even organizes some concerts at night every week.